The Lords Montague and Capulet are locked in a struggle attacking each with broadswords.   Before them, the bodies of Tybalt and Mercutio with their arms outstretched are raised on high, borne by specters of death, followed by the bodies of Juliet and Romeo – a vivid reminder of the tragedy about to unfold.

In the town square the Montagues and Capulets engage in light-hearted horseplay.  The two Houses taunt one another and a fight breaks out which is interrupted by the arrival of the Prince of Verona, who orders the fighting to cease.   The two Lords are forced to kneel and pledge their obedience.

Juliet is in her bedchamber teasing her nurse.  It is her 14th birthday. Her cousin Tybalt, arrives with a beautiful gown and she dances with glee at the prospect of her first Ball.    As guests arrive Romeo and his Montague friends appear uninvited and Lord Capulet grants them permission to stay. The three friends enter the house wearing masks as Juliet dances with her suitor Paris. She is eager to find out who is beneath the mask and Romeo reveals his identity and boldly embraces Juliet.  Tybalt recognizes his enemy Romeo and only the intervention of Lord Capulet prevents Romeo being injured. Romeo’s friends decide to make a swift departure dragging Romeo with them. That evening Juliet stands on her balcony overlooking the garden when Romeo arrives and the two young people declare their eternal love for each other.

Next day Romeo is day dreaming when his friends urge him to join the dancing in the town square.  He declares that he has fallen in love.  Celebrations are interrupted by the arrival of Tybalt and his knights, and by Juliet’s nurse arriving with a letter from her mistress.  Romeo’s friends tease her, trying to intercept the letter.  Romeo reads of Juliet’s love for him and her desire to be married.     He runs to Friar Lawrence to persuade him to conduct the marriage. Reading Juliet’s letter, the Friar believes the marriage may bring peace to the warring families, and agrees.   Juliet arrives and the lovers are married.   Mercutio leads merrymaking in the square when Tybalt arrives looking for Romeo to seek revenge.  Tybalt challenges Mercutio to a duel and stabs him.  At first Mercutio appears slightly wounded, but the arrival of the death spectres indicates his injuries are fatal.  Romeo’s friends urge him to avenge Mercutio’s murder and he snatches a sword and kills Tybalt.   The death spectres reappear.  Juliet, Lady Capulet and the nurse are grief-stricken.  The Prince of Verona banishes Romeo from the Kingdom.

Juliet is praying in her bedchamber when Romeo arrives. They dance to forget the dramatic events engulfing them and at daybreak bid farewell. When Paris arrives with a wedding gown to offer marriage, Juliet refuses and throws the gown to the floor.   Her parents threaten to disown her and she struggles to imagine an escape from this terrible situation.  In despair she runs to Father Lawrence explaining her only escape is death.  He gives her a phial to cause a deep sleep. She returns to her bedchamber, swallows the potion, falling into a coma.  When handmaidens and musicians arrive to serenade Juliet’s wedding day, her nurse cannot wake her.  Lord and Lady Capulet and Paris arrive as the phial falls from her lifeless hand and believe she is dead.    At nightfall Romeo returns to Verona.  Friar Lawrence has written to Romeo explaining that Juliet is asleep and they will be united, but the letter is missing.  Exhausted, Romeo dreams of Juliet, and has a nightmare that Mercutio, Tybalt and death spectres are carrying her away.   Benvolio wakens Romeo and tells him of the tragedy that has occurred.  A funeral cortege takes Juliet’s body to the family crypt.  Romeo is kneeling by Juliet’s body when Paris enters to pay his respects.  They fight and Paris is killed.  Romeo raises Juliet’s lifeless body trying to revive her, to no avail.  He swallows poison obtained from the Friar and falls dead by her side.   Within moments Juliet awakens to discover she is in the crypt.  Death spectres prevent her escape. Seeing Romeo’s body she tries desperately to wake him by kissing him passionately and tastes poison on his lips.  In despair she takes his dagger and plunges it into her body, collapsing by his side.   As her life ebbs away she takes her lover’s arm and places it across her face.

Monks gently bear aloft the bodies of Romeo and Juliet, Mercutio and Tybalt – a grim reminder of the prologue – but now the Lords and Ladies Capulet and Montague embrace each other, united in their grief at the tragic loss. 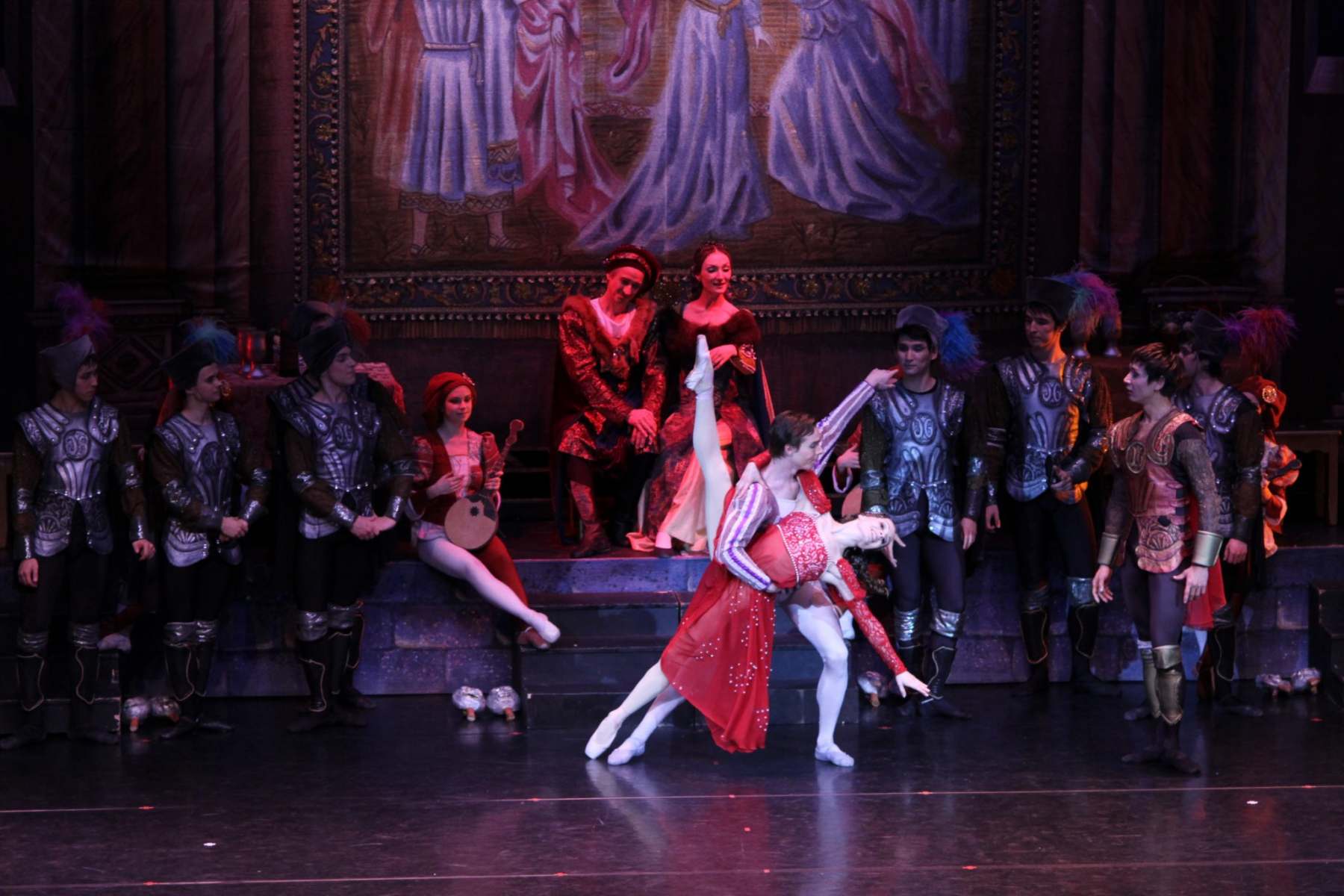 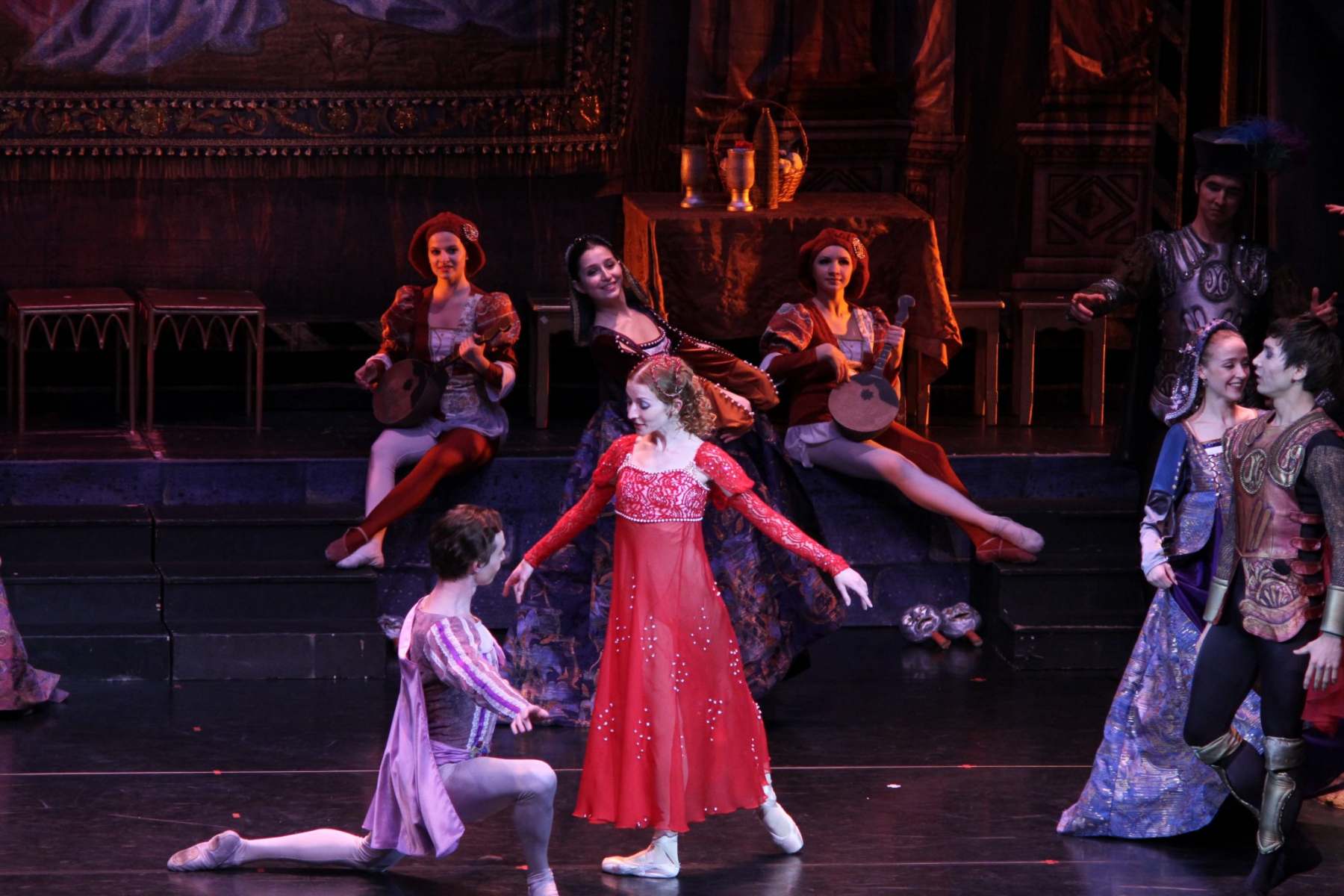 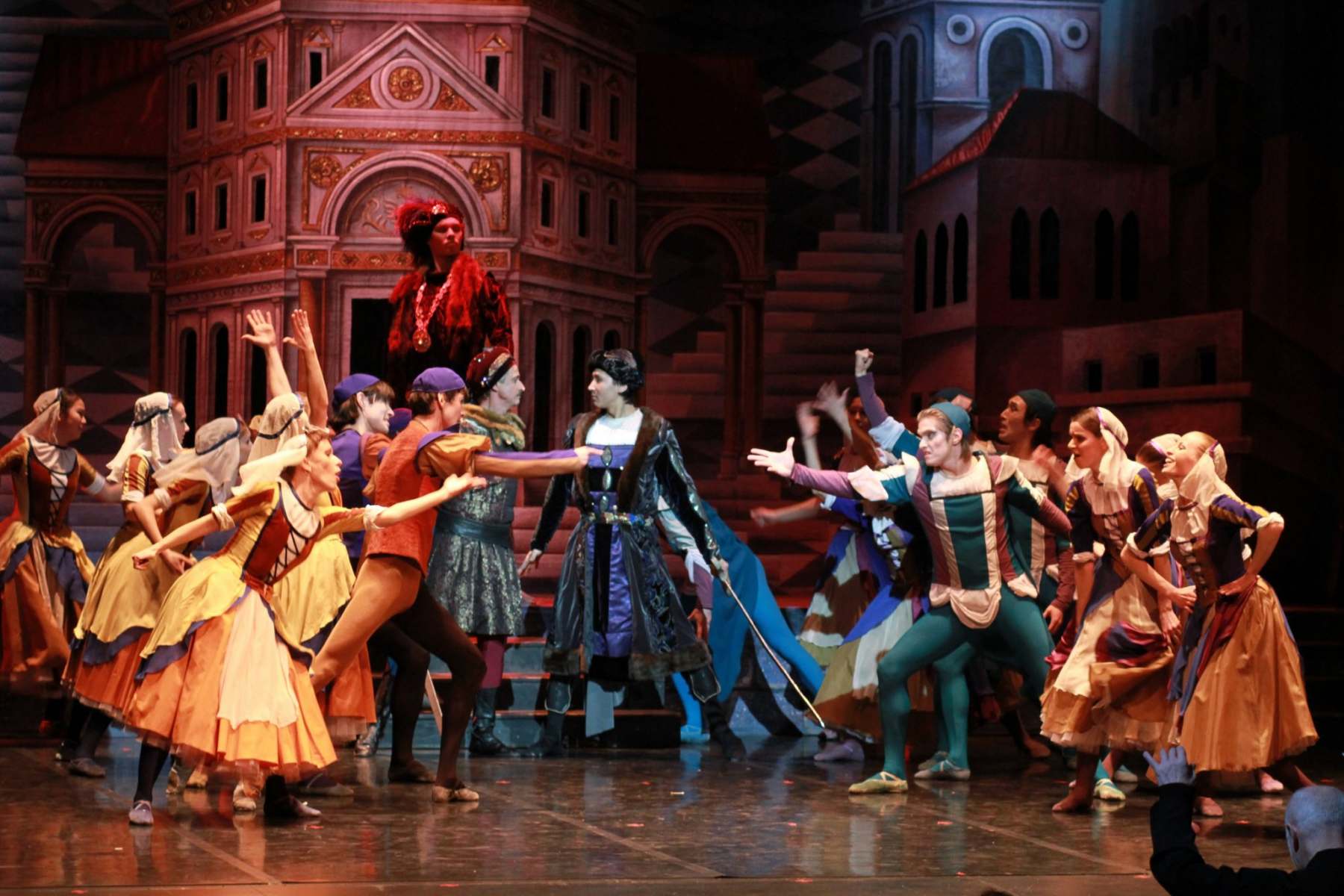 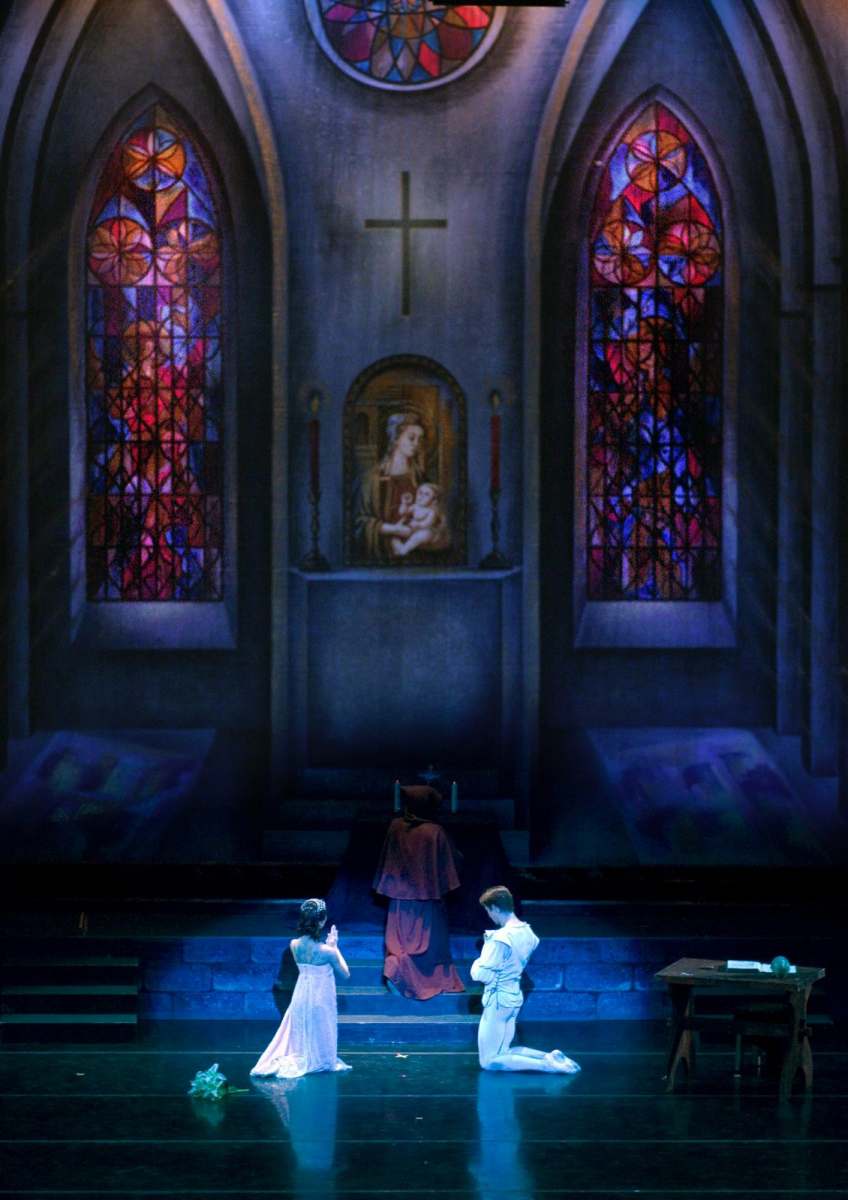 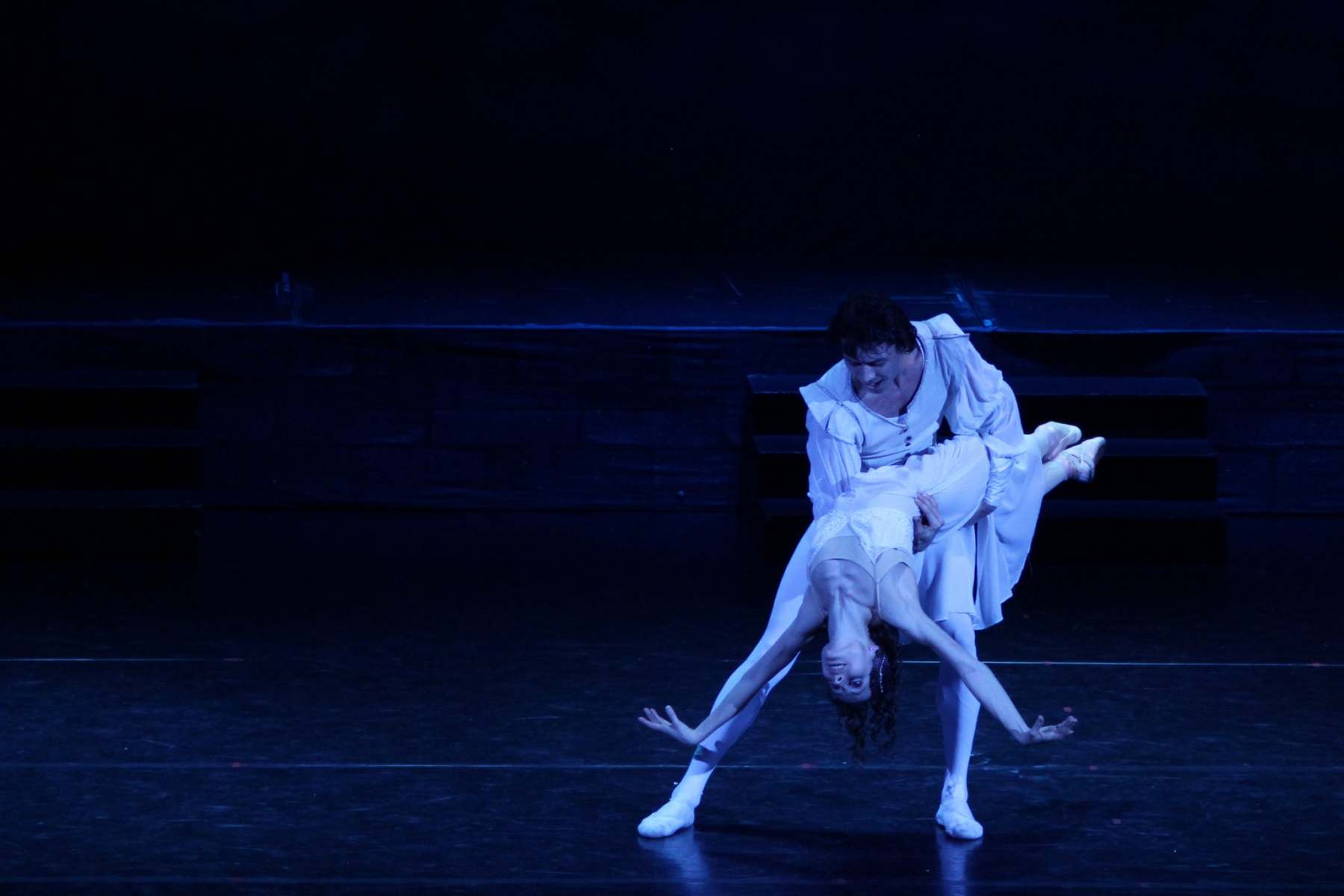 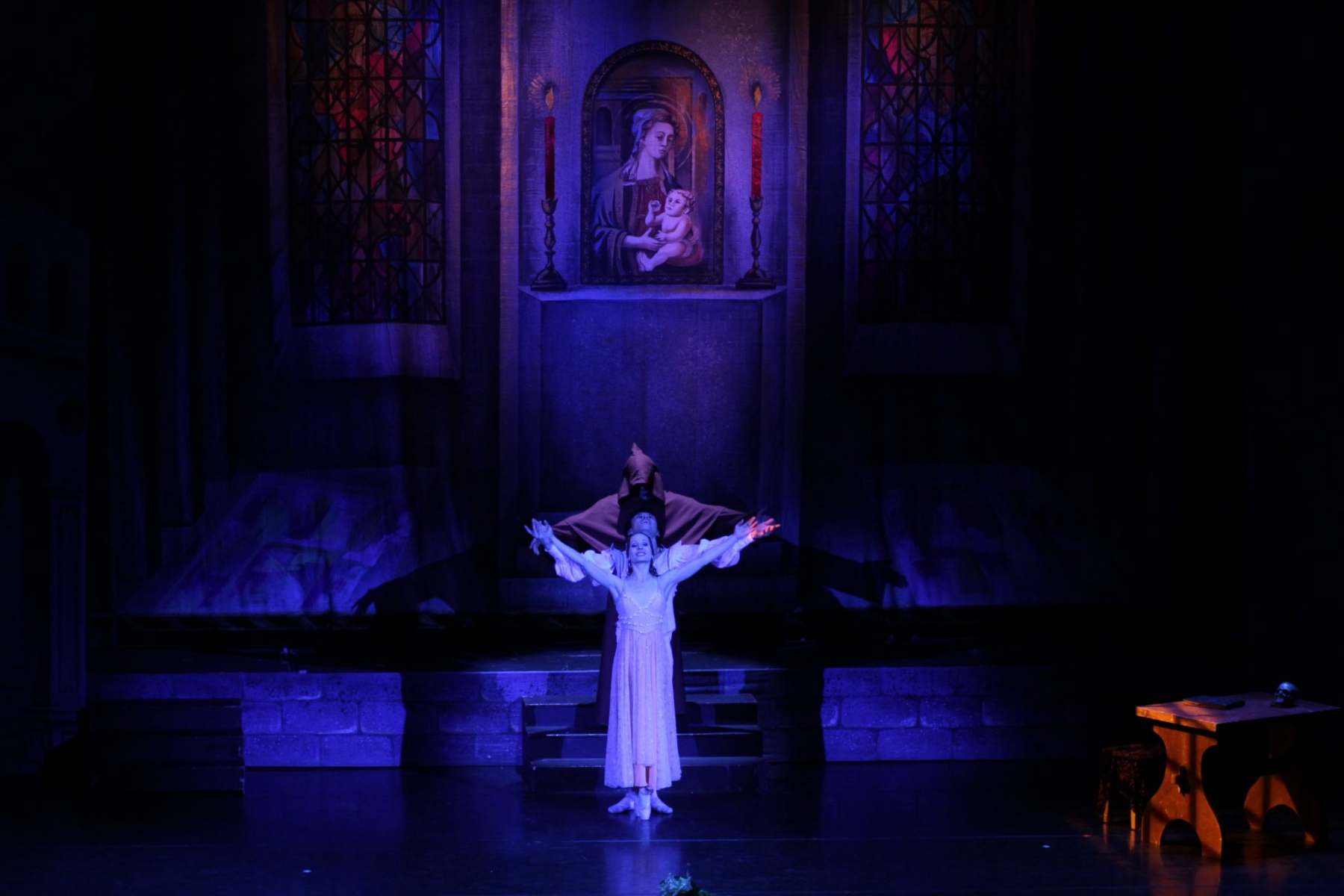 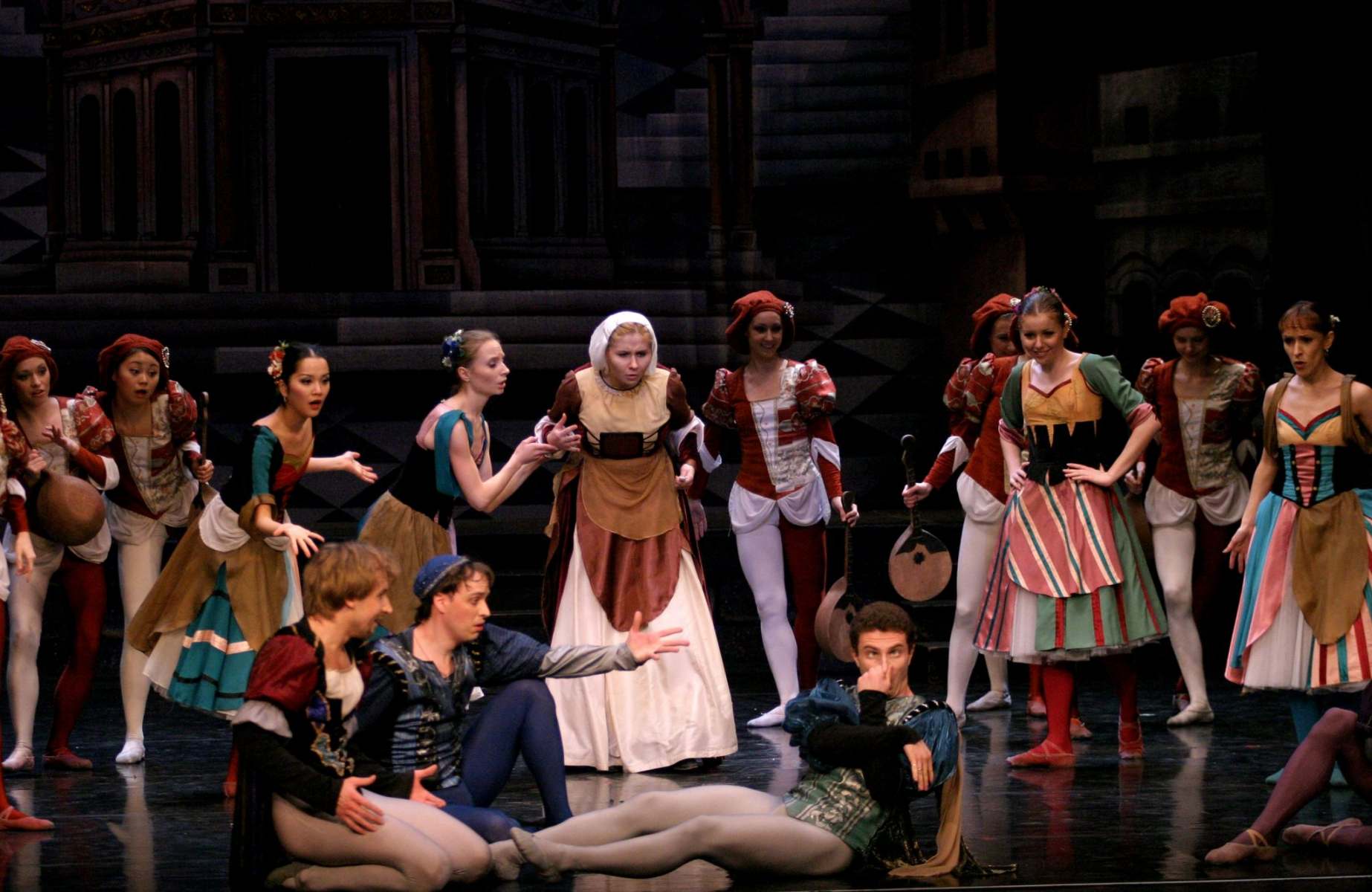 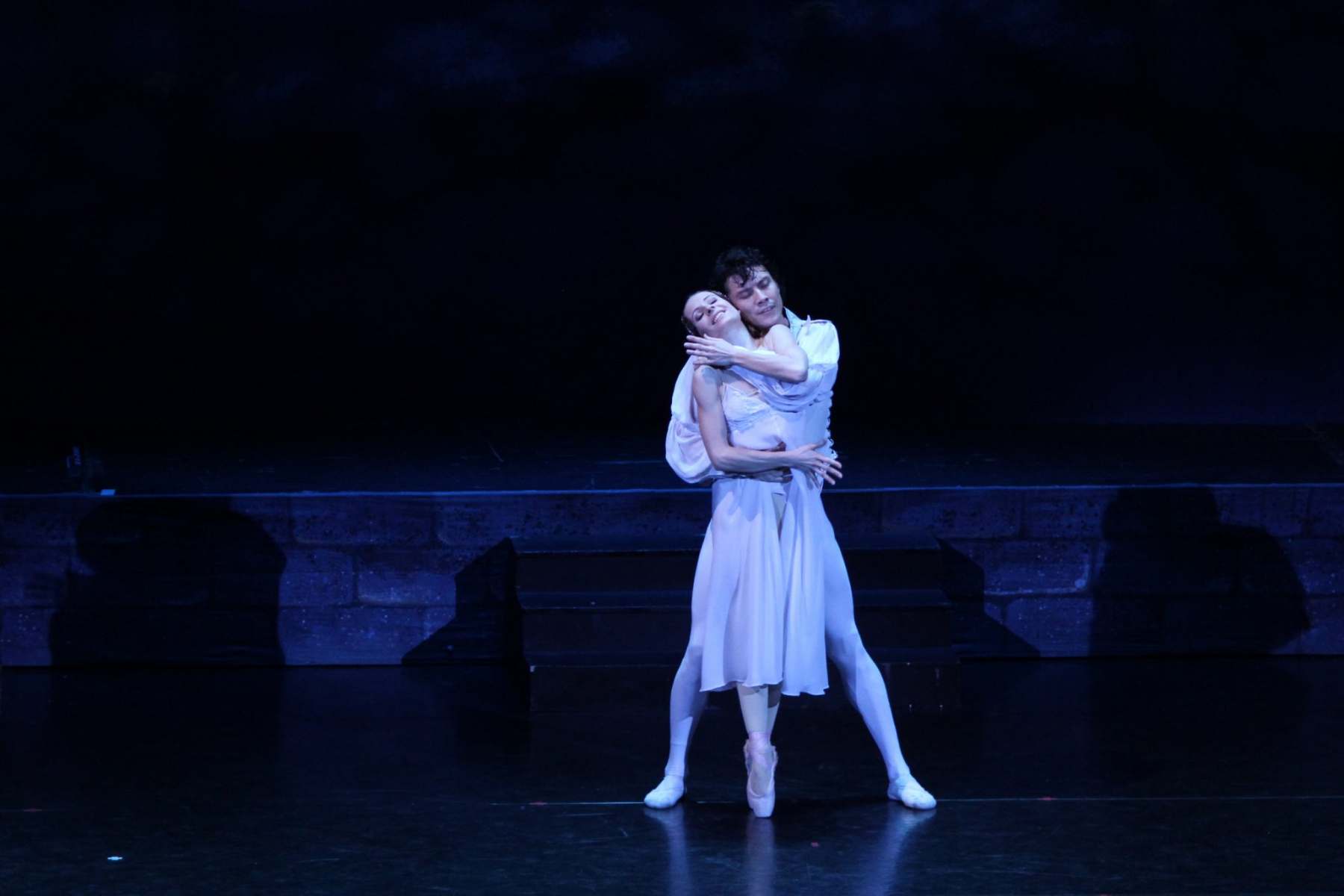 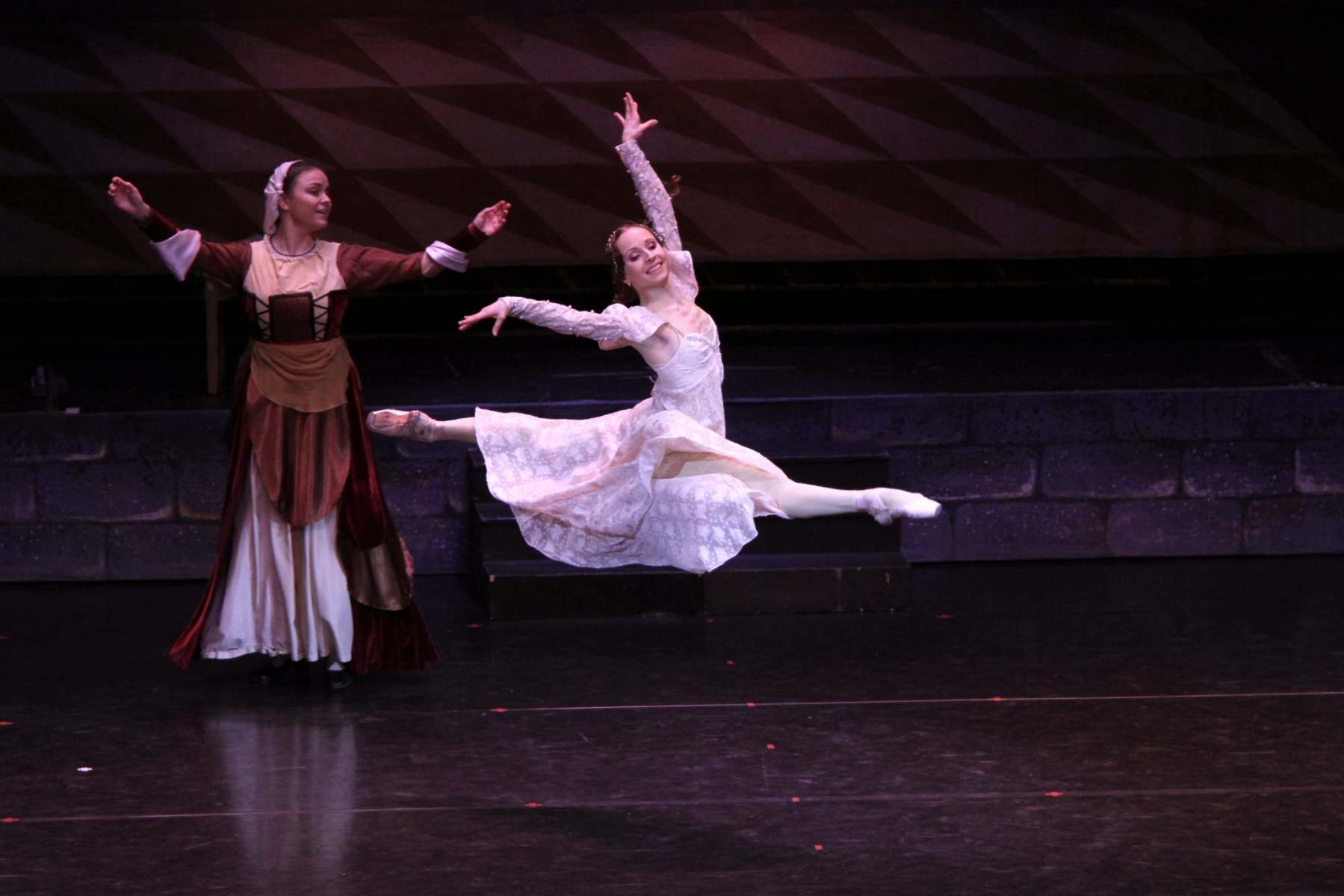 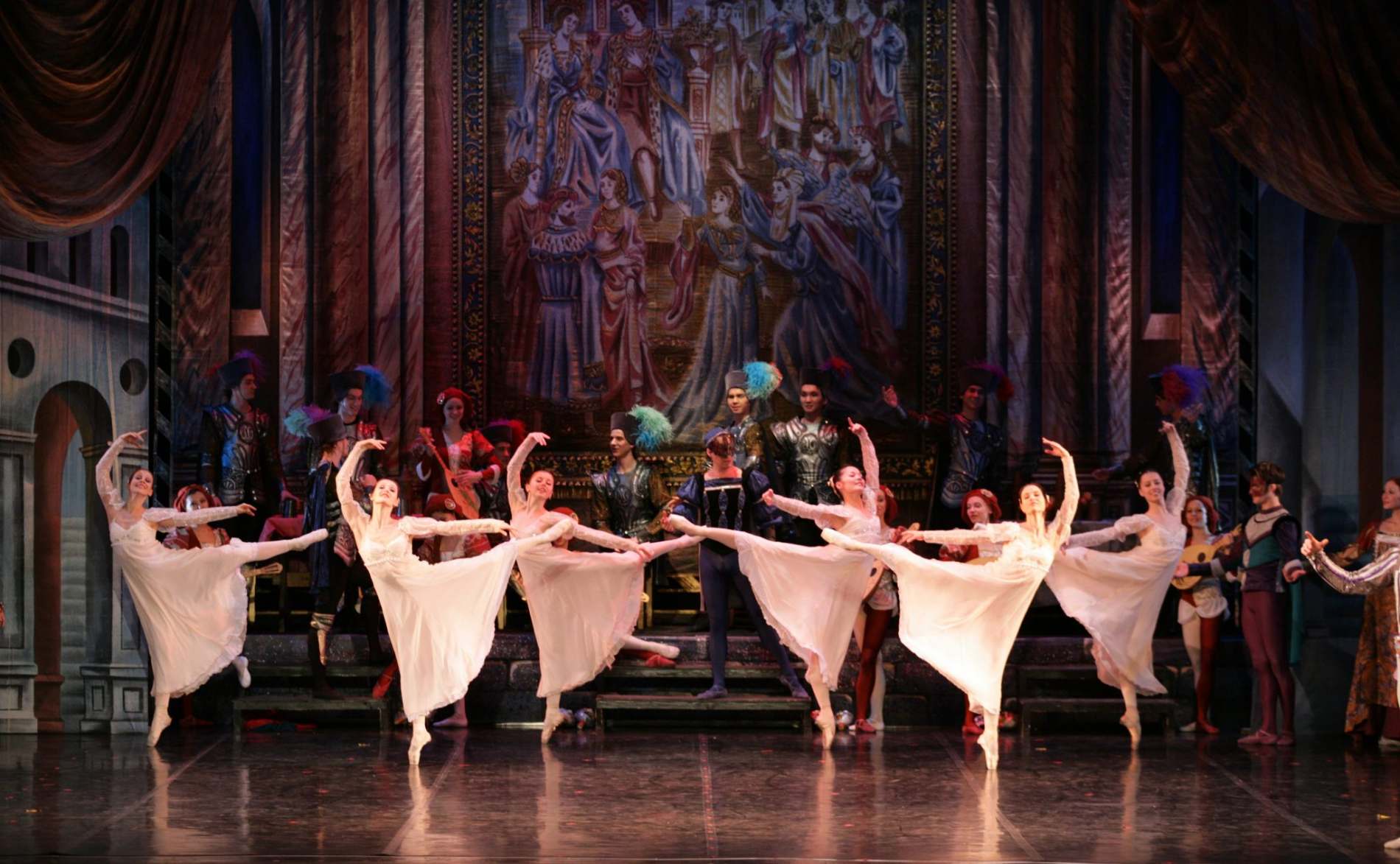 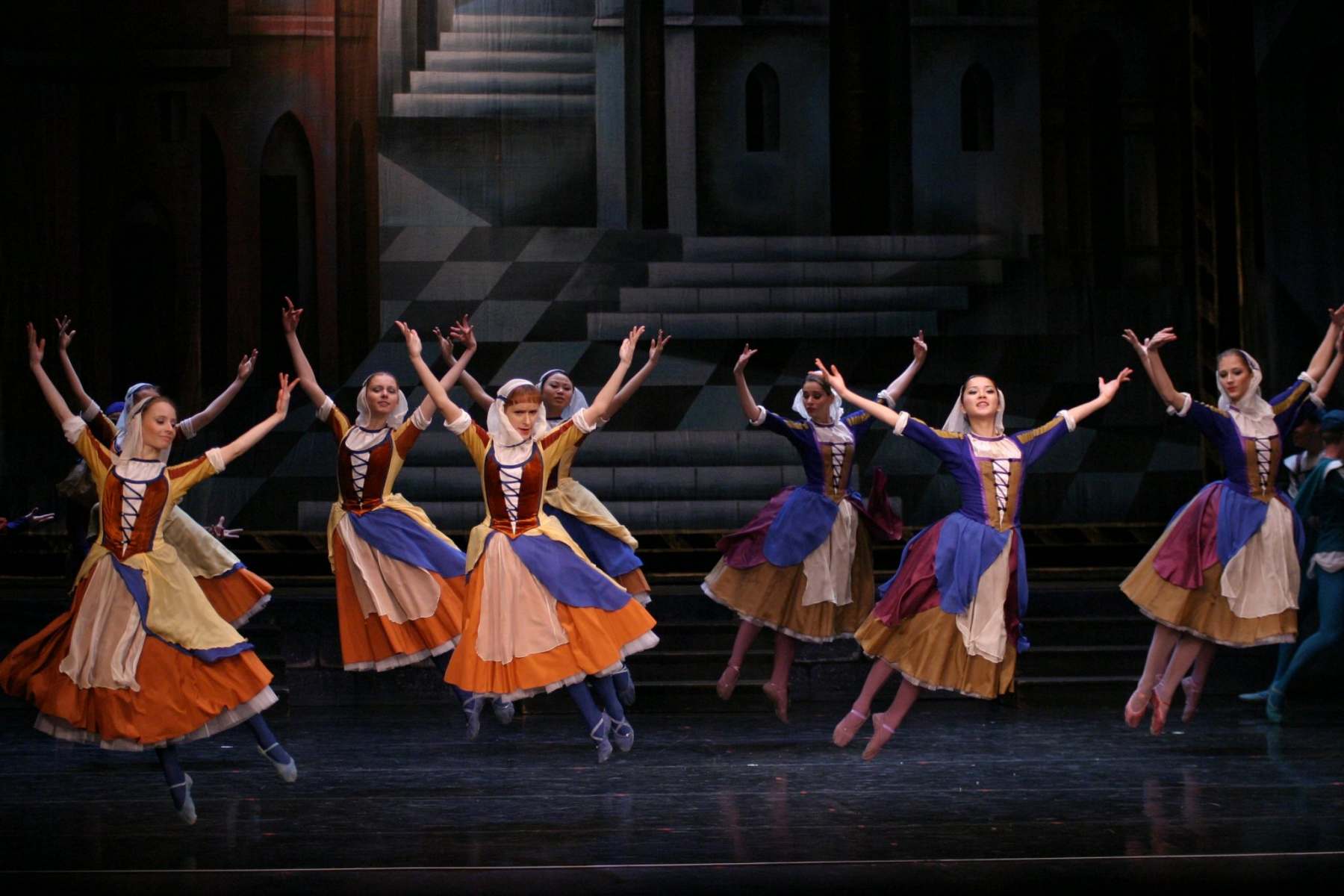 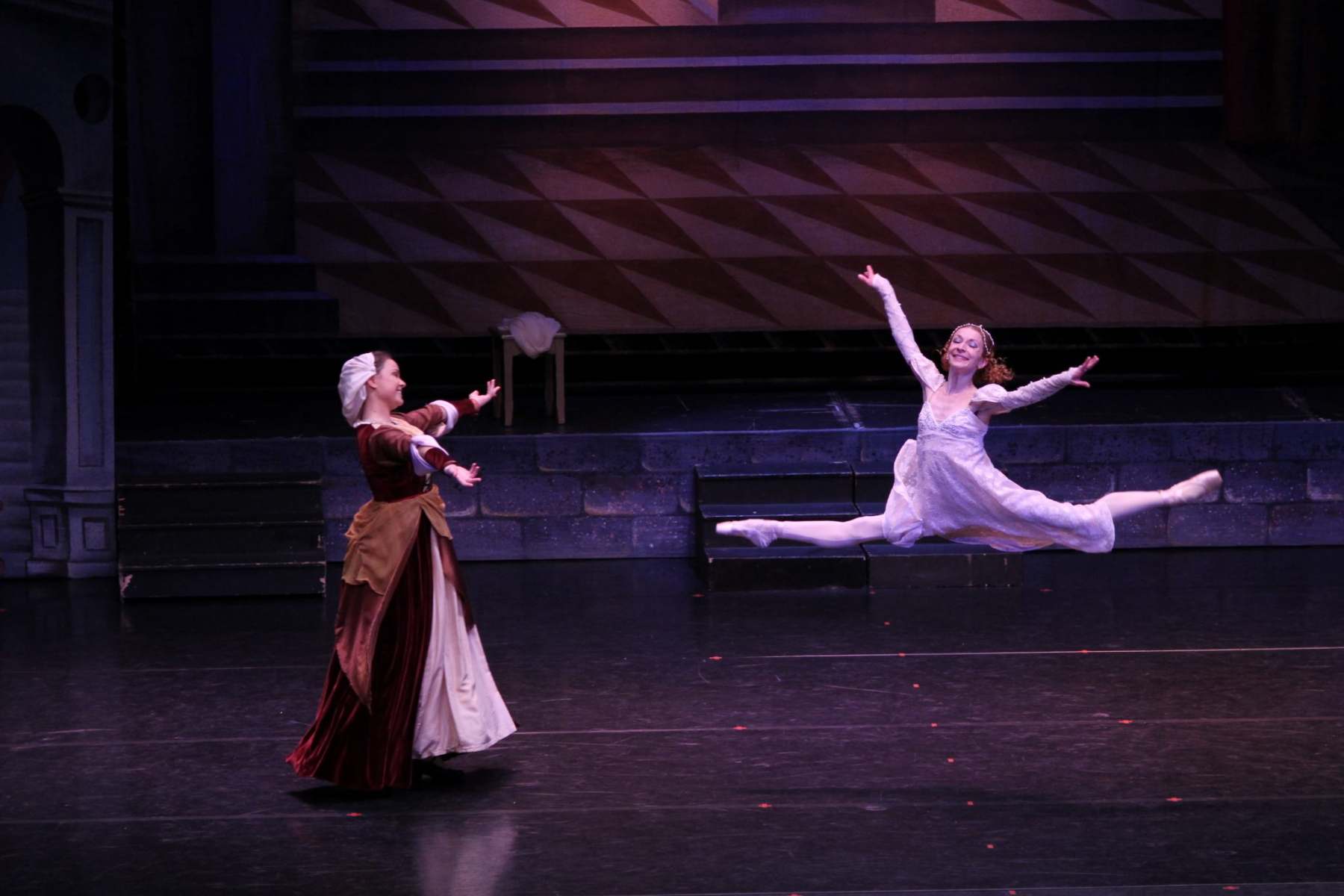 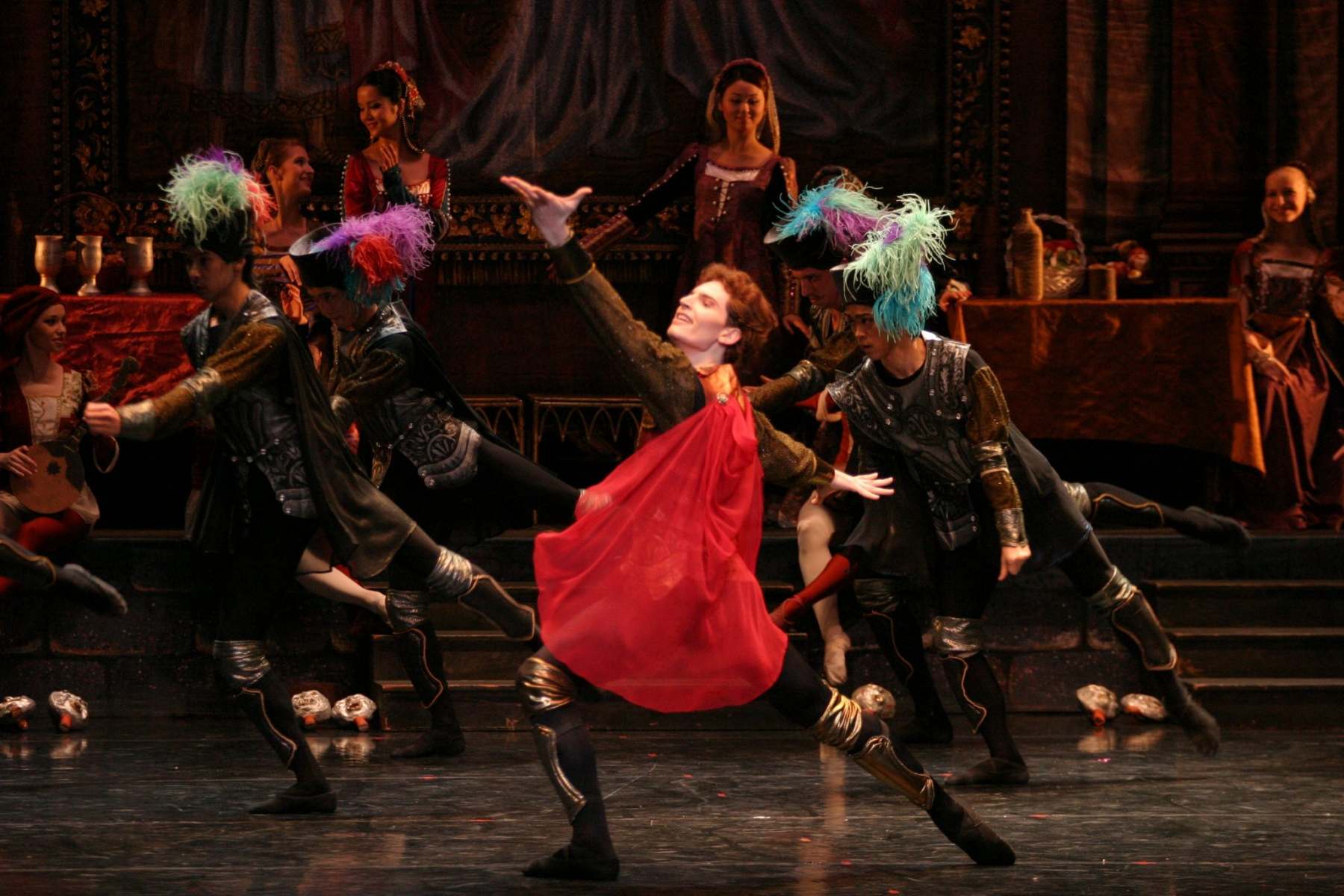 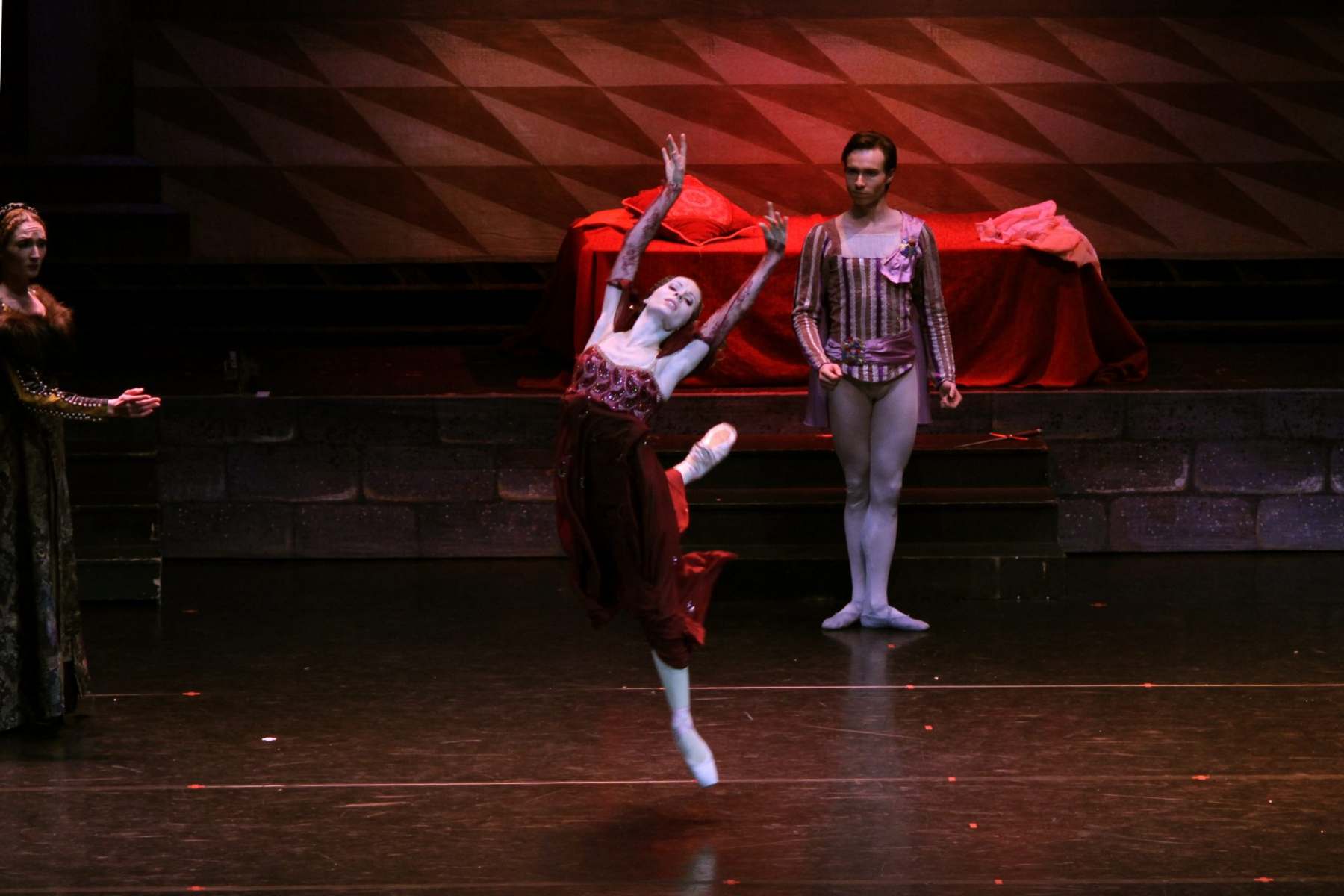 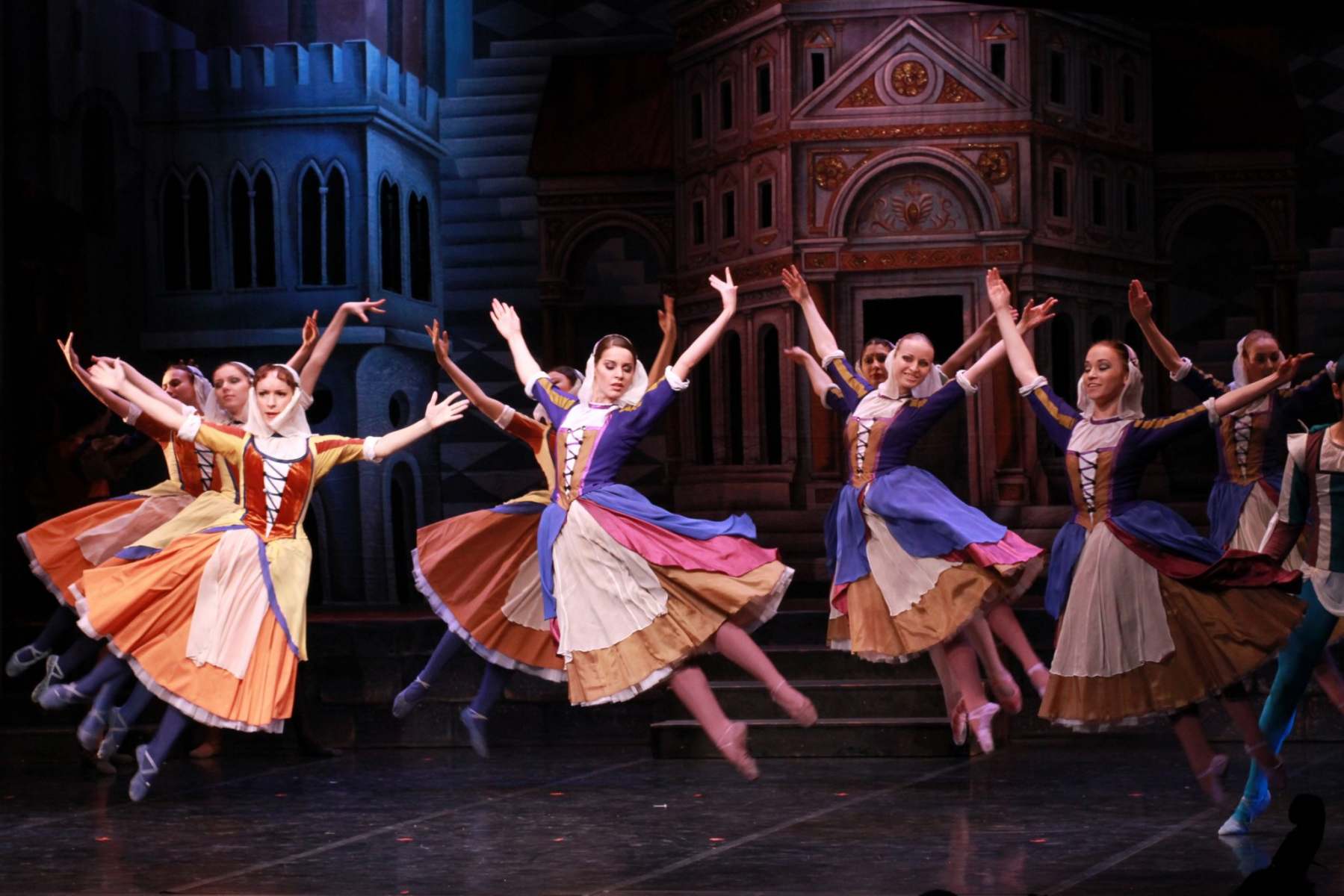 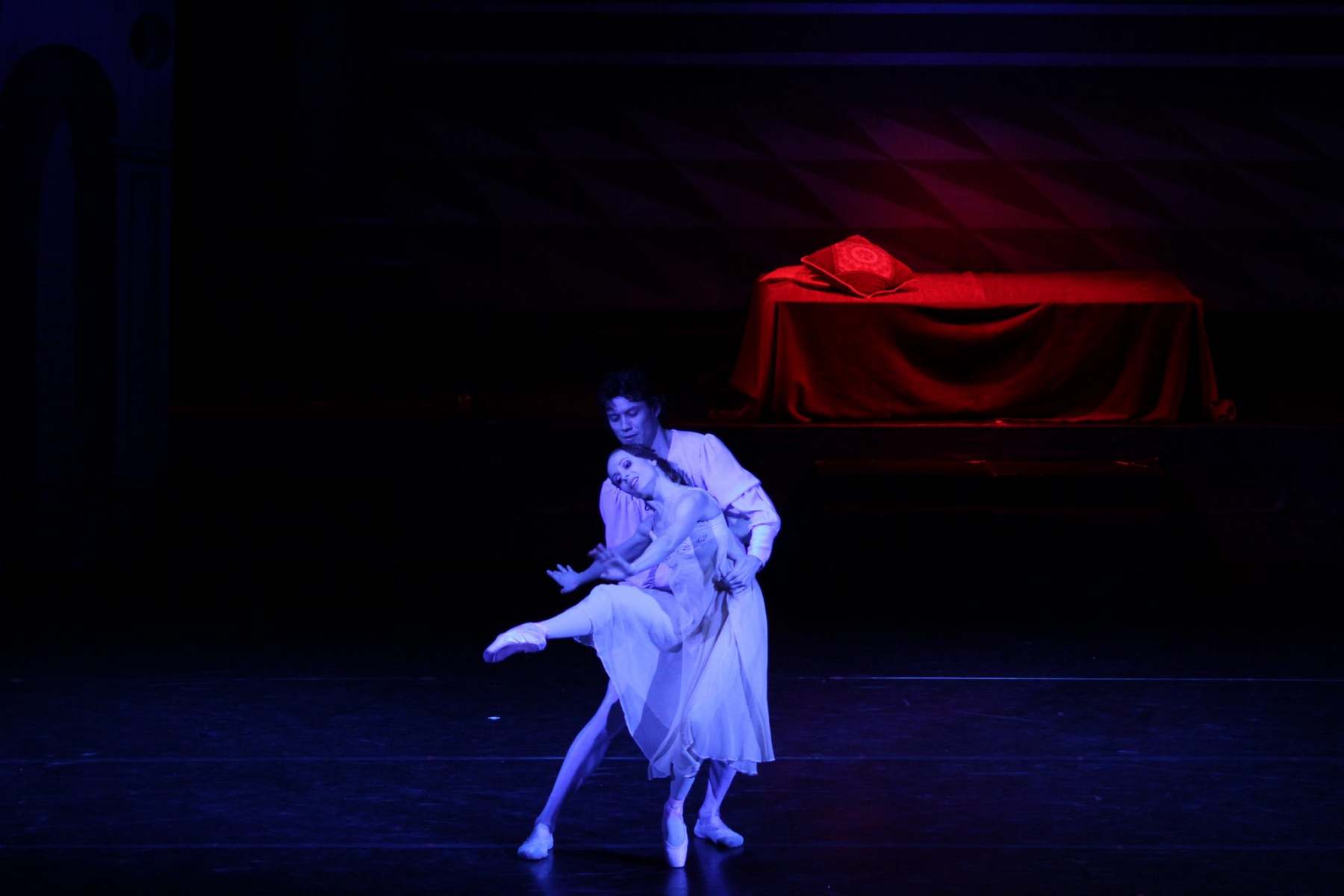 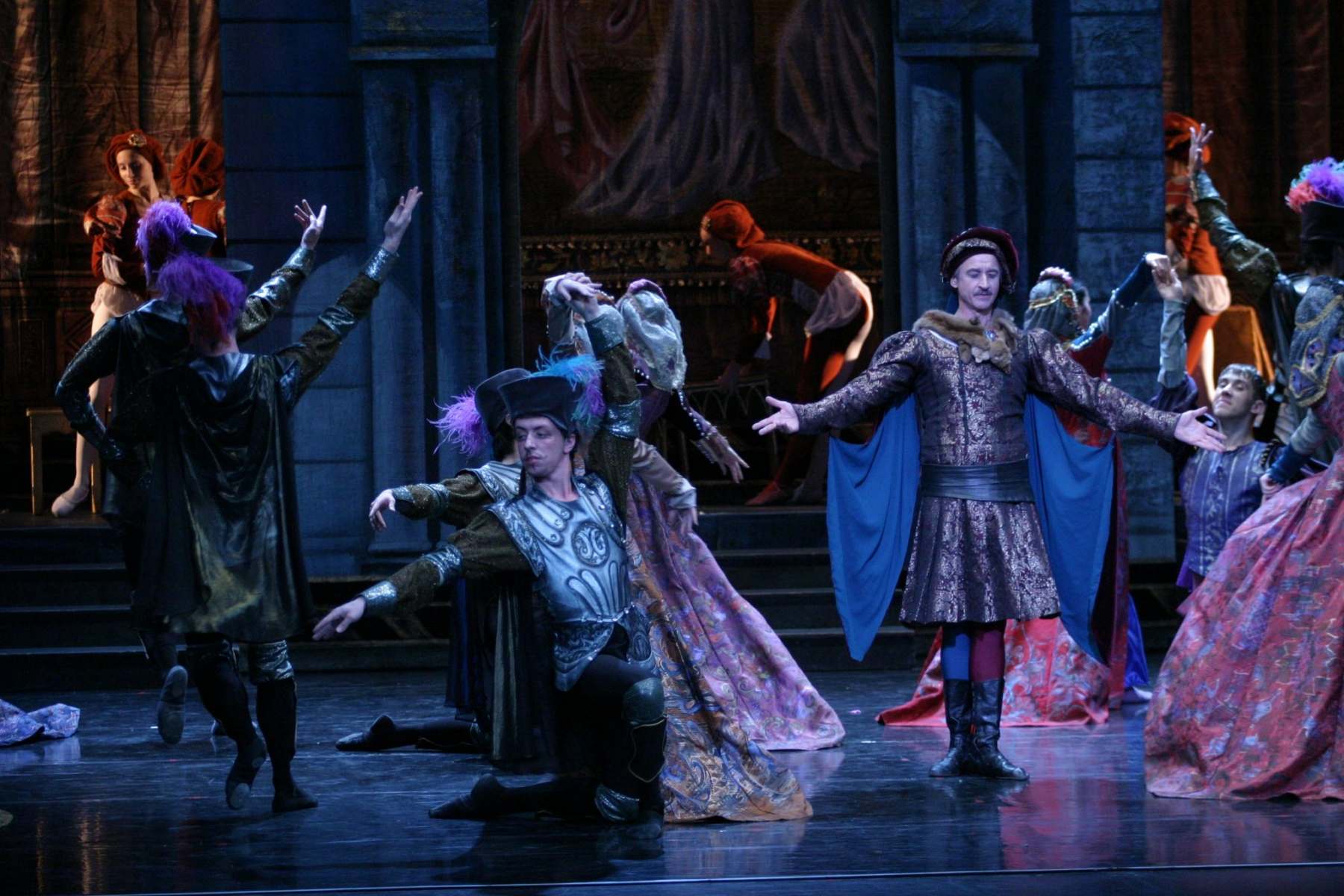 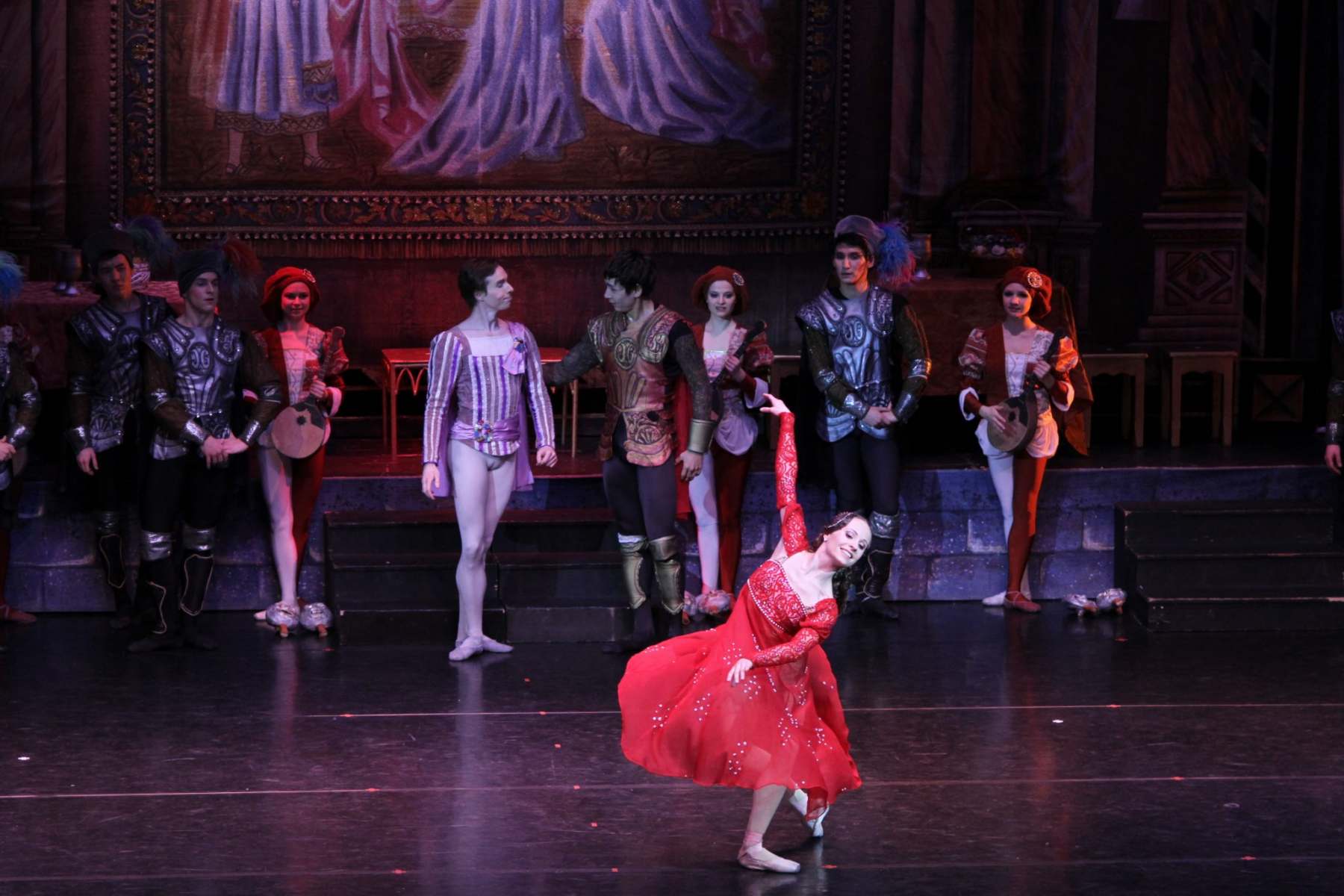 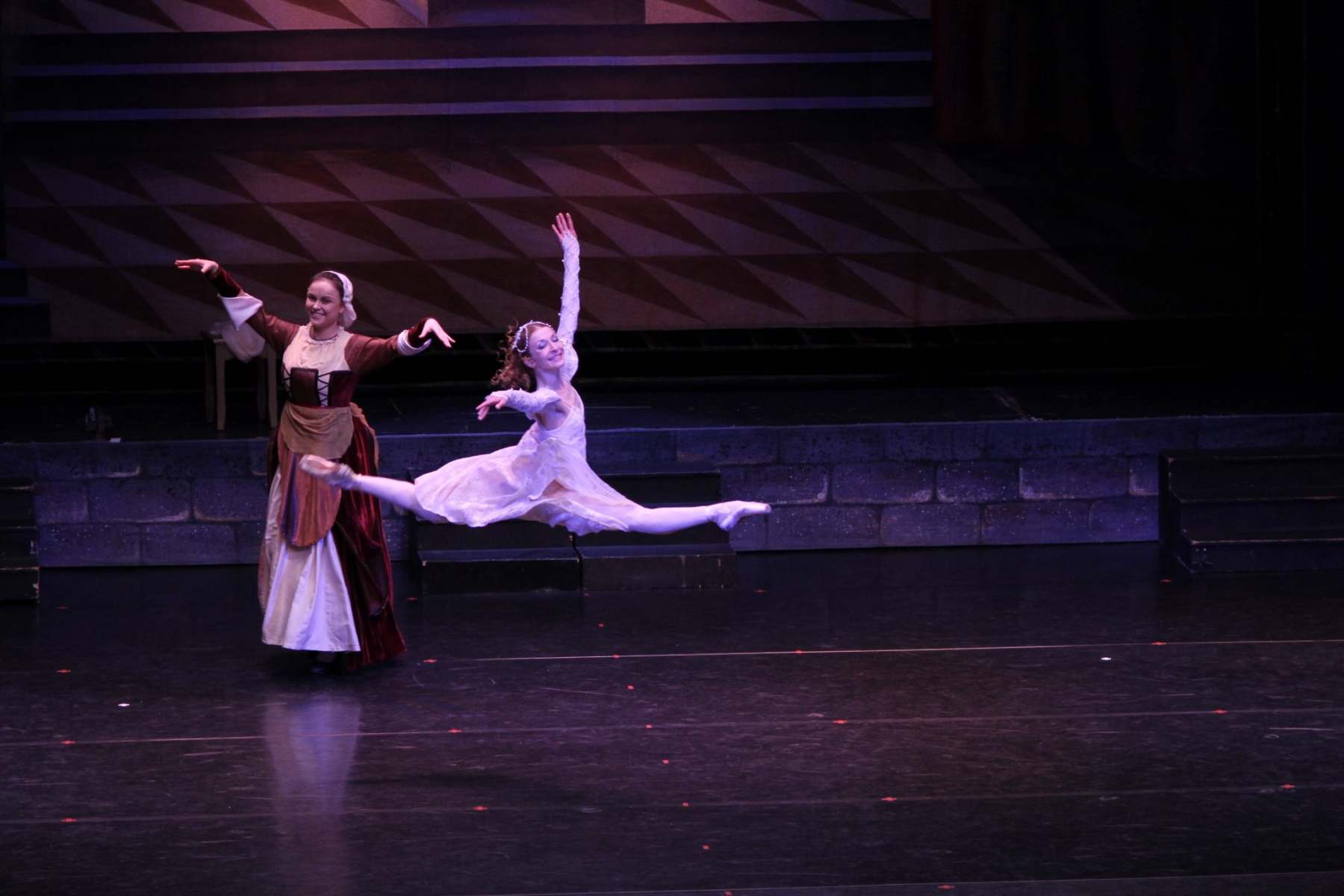 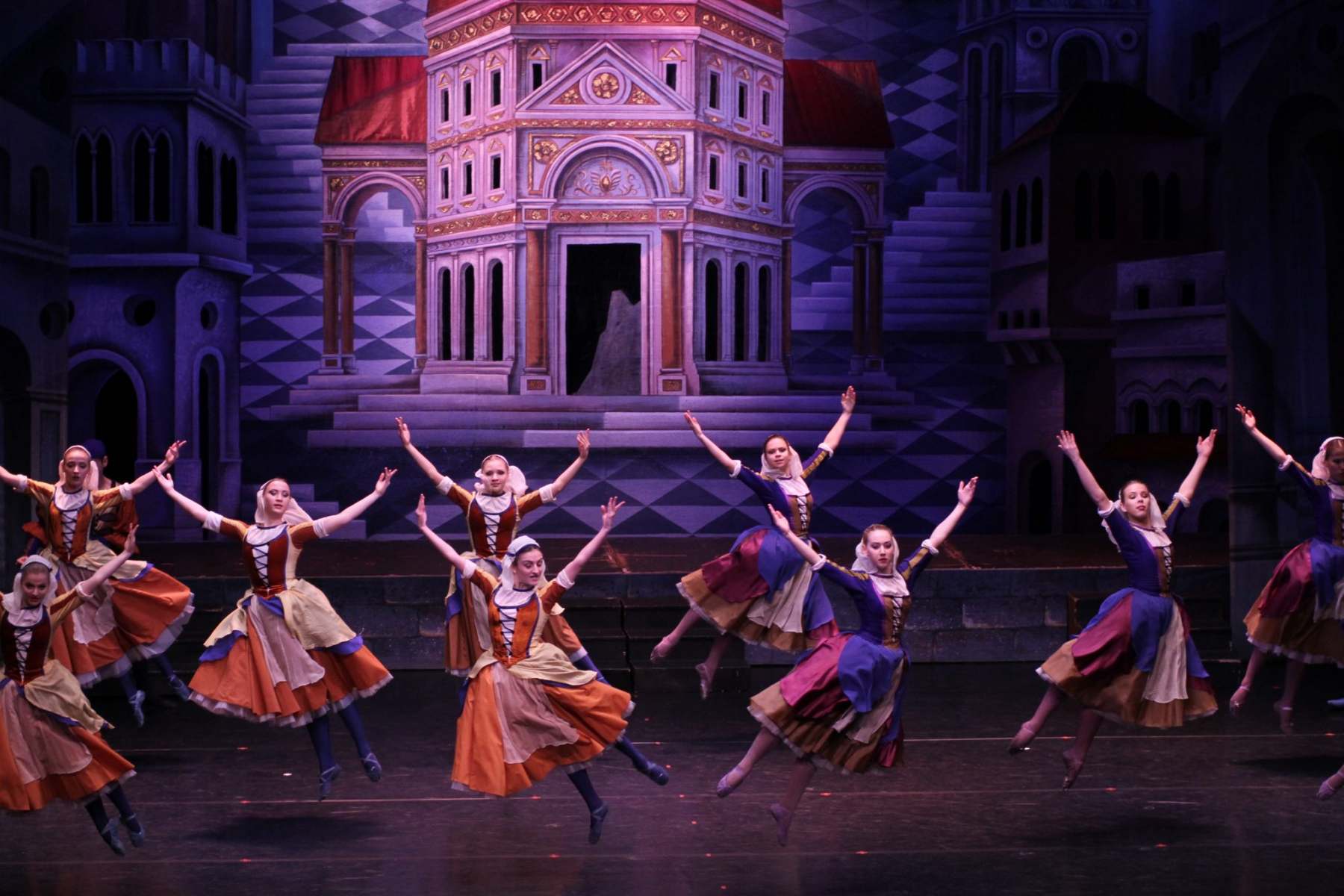 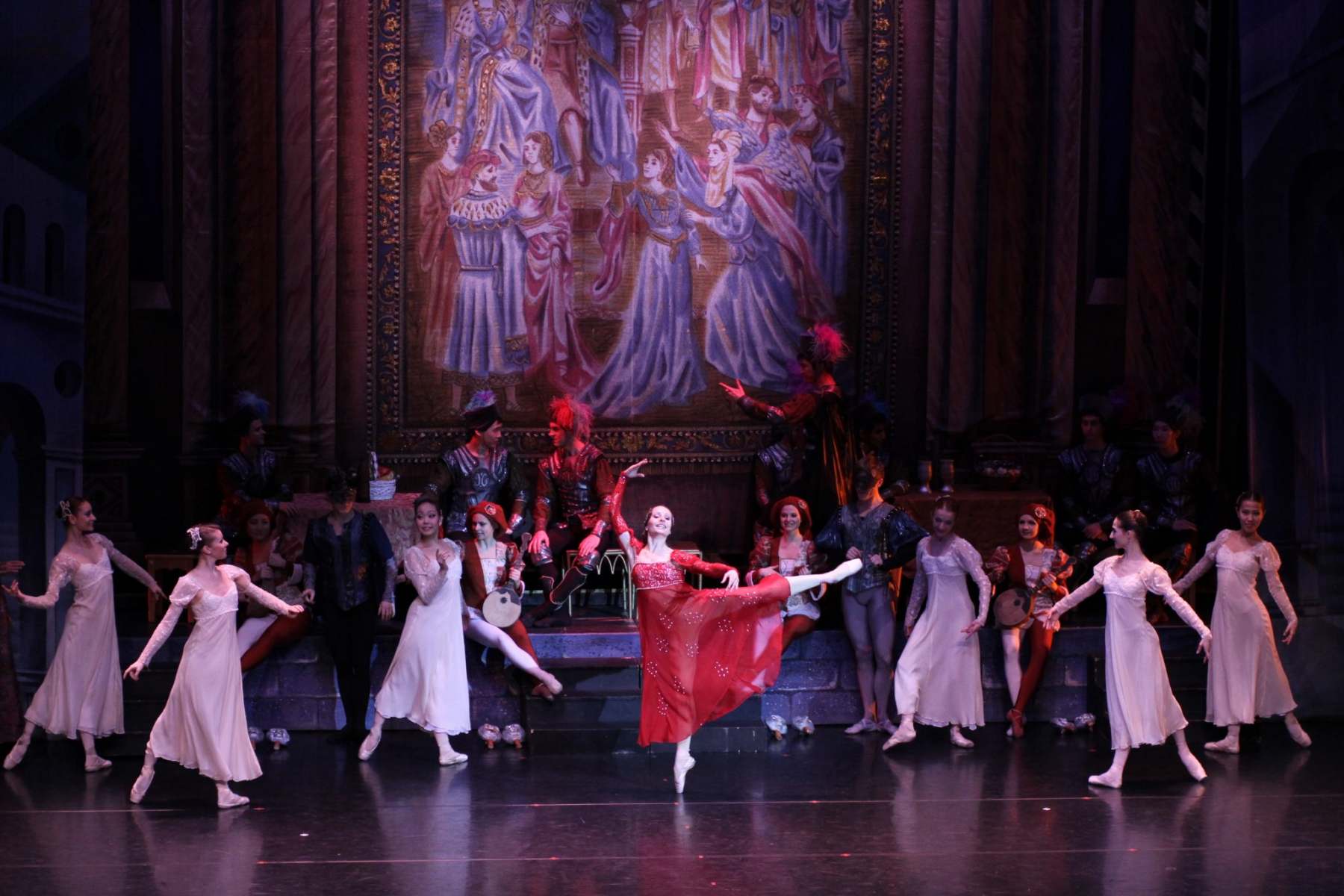